Madden 23 Cover Predictions: Who Will Be On The Cover This Year?

Though football may not be at the forefront of the minds of sports gamers just yet, Madden season comes up quickly. For some players, it never even ends, as league players and MUT diehards team-build all year long. But for many players, Madden season officially kicks off when the annual cover star has been revealed.

We can expect Electronic arts to announce the Madden 23 cover star in June if past timelines are any indication. But that means, until then, we get to speculate. Every year, the athlete earning the distinction of being the Madden cover star invites debate, superstition, and excitement from different pockets of fans. With that in mind, we’ve put together a list of who we think may grace the cover of Madden NFL 23. Who do you think will be on the cover this year? 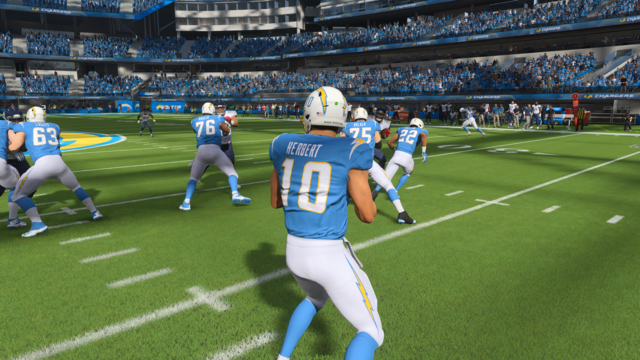 Herbie was fully loaded last season, coming one historically chaotic overtime game away from making the playoffs. In the 2022 season, Herbert and the Chargers are the hot team to watch, as free agency signings have filled out the roster to give Herbert his best chance to win. EA may see that success coming and give Herbert the cover in August so it looks like a brand full of clairvoyants come January. 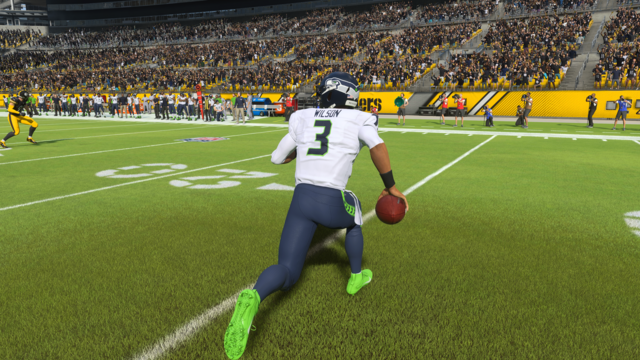 “Go Hawks!” is no more. In its place, the oft-sloganeering Wilson has coined “Let’s Ride” for his new fans and teammates in Denver. While Wilson’s locker room presence has been whispered about as maybe being a bit annoying over the years, fans love a winner, and he would bring his winning legacy and new jersey colors to the Madden cover, perhaps as a way to imply the series has been given a makeover much like his own. 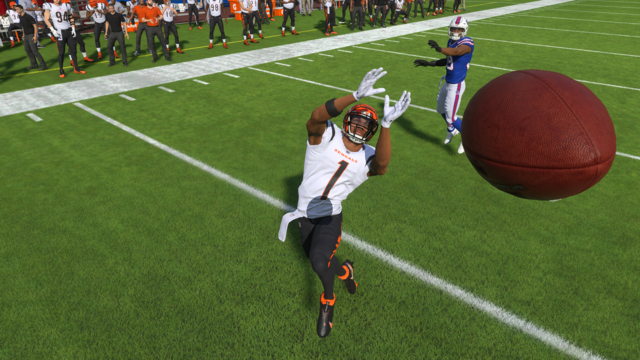 After finishing one of the single greatest wideout campaigns in NFL history, Ja’Marr Chase has two things EA loves to build around for its Madden cover art: a high-upside player and someone who still hasn’t hit their figurative ceiling. As incredible as Chase was last season, his 2022 campaign is likely to be even stronger as Cincy’s revamped offensive line should give Chase more time to develop game-breaking plays with his young QB. 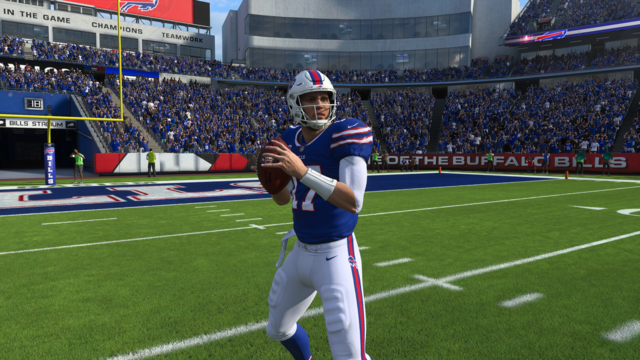 It can’t be overstated how electric Josh Allen was in his final game of 2021. He was virtually perfect, outdueling Patrick Mahomes in an overtime game where many fans cried foul when the rules didn’t offer Allen a chance to respond to the Chiefs’ first-drive touchdown to end the game in OT. He will come into 2022 with a chip on his shoulder, and EA may like the idea of marketing the game that way. “Take it,” “Prove yourself.” The company loves a slogan, and something like this would suit an Allen-led marketing campaign. 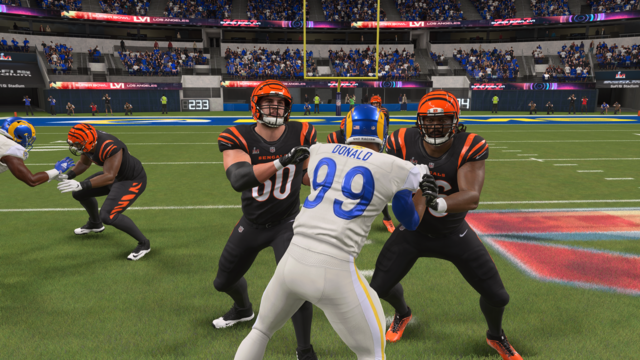 Another route EA may consider for its cover star is, of course, one of the star players on the team defending its championship this fall. Aaron Donald has somehow never been on the Madden cover before, despite being the very best defensive player in the league for about a decade now. Is this the year? Donald mulled retirement this offseason, meaning the 2022 season may be his last on the field and his first on the Madden cover. 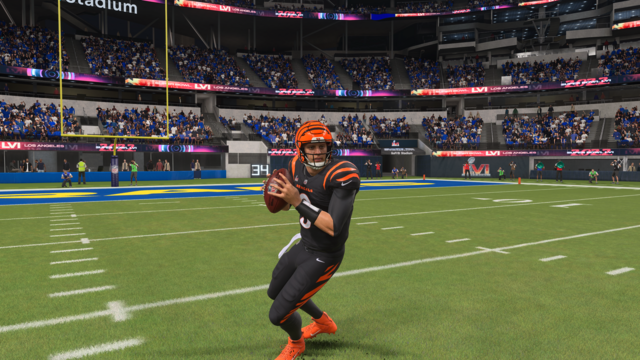 Everyone loves a QB. EA loves them so much that it put not one but two quarterbacks on the cover of Madden 22–and they had each already been on the Madden cover in previous years. For Madden 23, if EA wants to spotlight an up-and-coming QB as it has in recent years (Brady notwithstanding), Burrow is as wise a pick as any. He’s flashy in the way EA likes, too, bringing a certain swagger to both the field and the game’s box art. 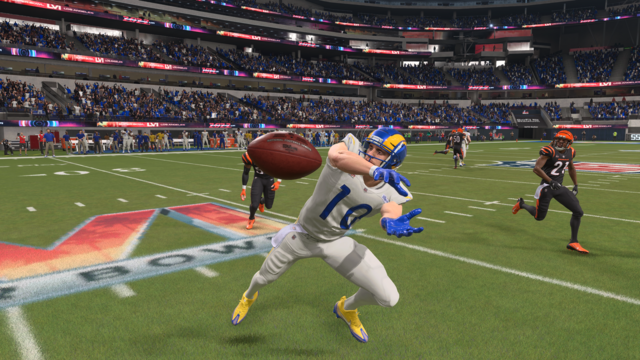 Cooper Kupp isn’t at all flashy like Burrow, but if EA wants to lean into his quiet confidence and unrivaled work ethic, the reigning Super Bowl MVP makes a lot of sense. This one may fit especially well if this year’s Madden focuses a lot on improving wideout mechanics, as in years past the publisher has shown a preference for featuring a player that fits some marquee new feature found in the game. 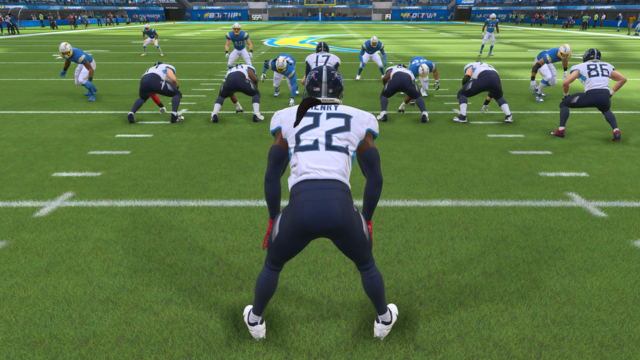 While the Madden team may have missed a golden opportunity to put #22 on the cover of Madden 22, Derrick Henry’s season would’ve just been more fodder for the Madden Curse crowd after he got hurt a third of the way through the season and looked ineffective in his one playoff game post-injury. But few doubt Henry’s superhuman ability to keep pounding, so he should return this year and prove himself to still be the best runningback in the NFL. 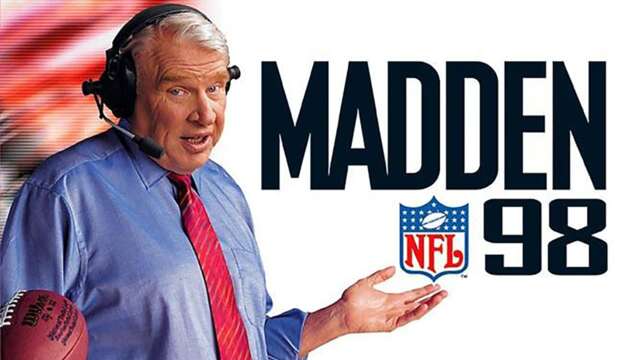 After John Madden retired as one of the most celebrated head coaches in NFL history, he went on to become one of the most celebrated color commentators in NFL broadcast history. Of course, he’s also the name on the box of every Madden, even if his voice hasn’t been in the game, or his face on the cover, for years now. Following his recent passing, expect the Madden team to honor the late great in some way. You can safely bet he will appear on the game’s high-end edition–likely called the All-Madden Edition, if we had to guess. But maybe he’ll even be the cover star for the game’s standard box art, too.