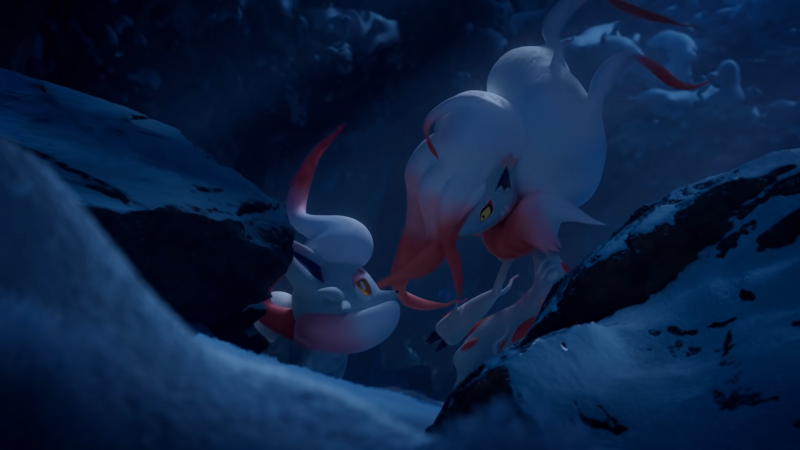 Deep in the snowy wilderness of the Hisui region featured in the upcoming Pokémon Legends: Arceus dwells a familiar Pokémon family with a unique form to this new entry in the series. A video released by The Pokémon Company shows the existence of Hisuian Zorua and Hisuian Zoroark, who are the first monsters to have a particular set of types.

The video, which you can watch below, is set in the point of view of an explorer looking to document wild Pokémon in Hisui with a “strange device,” which is a camera that shouldn’t exist long in the past when Legends: Arceus takes place. He’s first excited by the appearance of wild Snorunt but finds trouble when he ventures into the cold, dark woods. He comes across a little white Pokémon with a wispy red tuft on its head and a fluffy mane. This is Hisuian Zorua, a stark contrast to its traditional form, which sports black fur.

Unfortunately for the explorer, a dark shade emerges from the treeline, enveloping him in a spooky veil knocking him and his camera into the snow. A tall, white and red wild-haired Hisuian Zoroark appears next to Hisuian Zorua. Both glance one last time directly in the camera lens and turn to walk into the safety of the forest.

Both of these new forms have been confirmed by Joe Merrick at Serebii.net to be Normal and Ghost-type, a first-time type combination for any Pokémon. Standard Zorua and Zoroark are purely Dark, so thematically these new variations are similar in a way. With the discovery of this duo, the total count of Hisuian forms doubles to a total of four, and the brand new Pokémon count stands at three for now.

Pokémon Legends: Arceus is an upcoming Pokémon adventure that takes place long ago in the Hisui region, now known as Sinnoh. Trainers will embark on missions accepted in towns and venture out into the wild to catch and battle with Pokémon. It’s a dramatic change in the game style compared to the recent Sword and Shield or Brilliant Diamond and Shining Pearl, which will release in November. Pokémon Legends: Arceus is a Switch exclusive set to launch on January 28, 2022