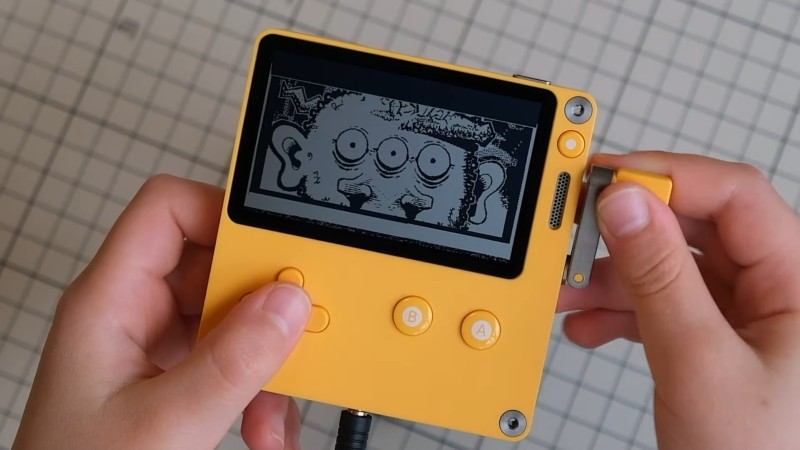 Panic’s Playdate handheld had a big coming out party today with a video update that showed off its first slate of games and revealed its price/pre-order date. One of the most exciting announcements was the news that Lucas Pope, acclaimed creator of Papers Please and Return of the Obra Dinn, is making a new game exclusively for the bite-sized handheld.

During the video Pope showed off a brief snippet of a game called Mars After Midnight. He describes the game as “less death, more laughs” and something he wanted his kids to be able to enjoy. The gameplay scene is set at an anger management meeting for cyclops, with a sign advertising the session taped to a letter slot-style door.

When something knocks on the slot, Pope turns the Playdate’s analog crank to flip the slot open, revealing a curious monster on the other side. A new monster appears each time he opens and closes the door, showing off their goofy designs. Meanwhile, Pope uses the d-pad to pan the camera in different directions. There’s a hint of 3D depth to panning, as the camera slightly rotates instead of simply moving up/down, left/right on a flat plane. You can check out the demonstration yourself in the video below, beginning at the 7:35 mark.

Pope says that Mars After Midnight is still early in development so he doesn’t have a release timeline to share at this time. “It’s not much, and I can’t say I know what I’m doing, but we’ll see how it goes,” he says in the video. The game certainly looks charming and the crank mechanic, simple as it might look on the surface, is a fun touch that sells the Playdate’s unique features.

To find out why we’re excited to see what Lucas Pope cooks up next, check out our reviews for Return of the Obra Dinn and Papers, Please.

What do you think of Mars After Midnight? Are you interested in buying a Playdate? Let us know in the comments!