Launching our first game production, our goal was to create an experience everybody could enjoy, no matter their gaming experience, and where players would laugh and chat together while playing.

Unspottable ended up being just that, a game very easy to play but with enough depth that players can replay, improve, and still have fun. It has been so great to hear feedback from couples and families with young children playing together.

I came up with this mix of hide-and-seek and modified Turing test party game idea while experiencing a bug in a fighting game. The game stopped showing the user interface and left me confused on who I was controlling and who the opponent was. Having to guess which character was mine and try to understand who the real opponent was amongst the NPCs (non-playing characters) was very fun! This idea allowed us to build a core gameplay very easy to pick up and still have plenty of options to twist the concept to decline the fun in many different ways.

The key mechanic of the game is to guess who the real players are amongst a crowd of AI. All players share the same screen though, so there can’t be any visual indication to show which characters are controlled by players. For that reason, the first task for each player is to guess who they are controlling while still blending in the crowd. Then they must observe to find the opponents and sneak towards them to punch.

As a game developer, my favorite aspect of the game was experimenting with AI in a way that is very different from other games. Instead of working towards more and more accurate and realistic AIs with complex behavior, I was able to simplify it as much as possible and just make it the player’s goal to copy the AI to blend in.

I even pushed it further, in the factory level (my personal favorite), where the AI is broken on purpose. The characters move faster and erratically, spin in circles or get stuck against walls. That forces the players to do the same if they want to blend in and was super fun to see as a game designer when players run against walls pretending to be broken robots!

The first game demo was released Xbox One as part of the Summer Festival 2020 and we were overwhelmed with the response from players with almost 10k downloads and so many great comments from Xbox One players. That response was a great push for a very small team like us. There are only three of us: Maxime Granger, Yohan Lebret, and myself, and it really helped finding the motivation to handle the many different challenges we faced this year.

I’m so happy with what we achieved this year, releasing our first game, getting great responses from players and now releasing on an Xbox console which has always been a dream of mine. It shows that it’s more accessible than ever for small independent studios to be seen on platforms like this one.

If you like fun couch party games to play with friends or family, please check out Unspottable. 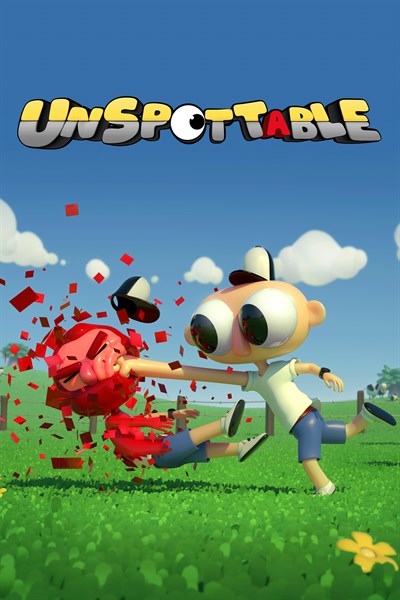 ☆☆☆☆☆
4
★★★★★
$11.99
Get it now
Xbox One X Enhanced
Unspottable is a competitive couch party game for 2 to 4 players.
Blend in the crowd of AI characters, hunt down the other players and use the many different environment specific rules to win the game.