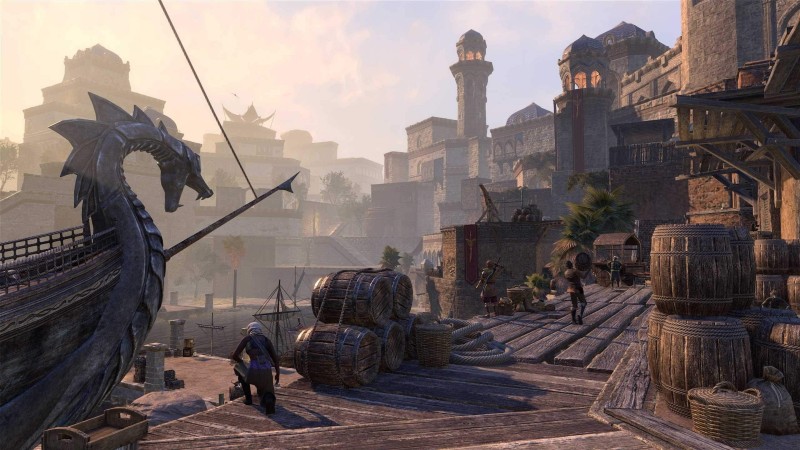 In the shadow of its big Oblivion expansion, The Elder Scrolls Online makes the jump to PlayStation 5 and Xbox Series X/S this summer with the Console Enhanced edition. As the name implies, this updated port takes advantage of the current console’s power by allowing ESO to run natively on those systems, giving the game’s performance and graphical fidelity a big shot in the arm.

The update arrives on June 8 and comes free of charge to those who own the PlayStation 4 and Xbox One versions of ESO. Console Enhanced bumps the game’s framerate from 30 frames per second to 60 while playing in Performance Mode. Fidelity Mode nets you native 4K visuals and 30 fps. According to the official press release, load times have also been cut in half.

ESO’s draw distance has also been nearly doubled across the board, so you can gaze even further out into Tamriel’s horizon. Other graphical perks include improved reflections and shadows, circular depth of field for more realistic background views, as well as high-resolution textures and updated antialiasing. It also sports better ambient occlusion and screen space global illumination for improved lighting.

Console Enhanced will launch simultaneously with Update 30 of ESO. The news comes alongside the launch of the Blackwood Prologue, a free standalone story that leads into the year-long Gates of Oblivion event. The chapter is live now, as is a Free Play Event that gives new players free access to ESO’s base content and Vvardenfell zone until April 13.

As a reminder, The Elder Scrolls Online is part of the Xbox Game Pass library. It’s unclear if those who play that version are eligible for the free Console Enhanced update since you’re not technically purchasing it. If so, then that would be one heck of a deal, but I’m sure Bethesda will offer clarification down the line.

Are you excited to play The Elder Scrolls Online on current-gen systems with these enhancements? Share your thoughts in the comments.